Cardinal Health (NYSE:CAH – Get Rating) last released its quarterly earnings data on Thursday, August 11. The company reported EPS of $1.05 for the quarter, missing the consensus estimate of $1.17 per ($0.12). Cardinal Health had a negative return on equity of 252.82% and a negative net margin of 0.59%. The company posted revenue of $47.10 billion in the quarter, versus a consensus estimate of $44.82 billion. In the same quarter a year earlier, the company posted earnings per share of $0.77. Cardinal Health’s quarterly revenue increased 10.6% compared to the same quarter last year. On average, stock analysts predict Cardinal Health will post earnings per share of 5.26 for the current fiscal year.

The company also recently declared a quarterly dividend, which will be paid on Sunday, January 15. Investors of record on Tuesday, January 3 will receive a dividend of $0.4957. The ex-date of this dividend is Friday, December 30. This represents a dividend of $1.98 on an annualized basis and a yield of 2.63%. Cardinal Health’s dividend payout ratio is currently 32.35%.

In other news, insider Ola M. Snow sold 19,590 shares of the company in a trade that took place on Monday, November 7. The stock was sold at an average price of $78.87, for a total transaction of $1,545,063.30. Following the sale, the insider now directly owns 31,187 shares of the company, valued at approximately $2,459,718.69. The sale was disclosed in a legal filing with the Securities & Exchange Commission, accessible via this hyperlink. 0.17% of the shares are held by insiders. 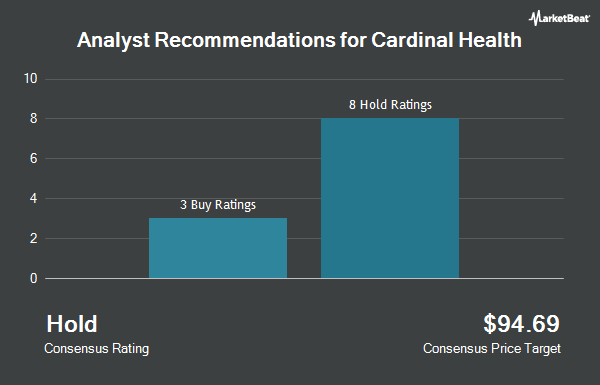 This instant news alert was powered by MarketBeat’s narrative science technology and financial data to provide readers with the fastest and most accurate reports. This story was reviewed by MarketBeat’s editorial team prior to publication. Please send questions or comments about this story to cont[email protected]

Before you consider Cardinal Health, you’ll want to hear this.

MarketBeat tracks daily the highest rated and most successful research analysts on Wall Street and the stocks they recommend to their clients. MarketBeat has identified the five stocks that top analysts are quietly whispering to their clients to buy now before the market takes off…and Cardinal Health wasn’t on the list.

Although Cardinal Health currently has a “Hold” rating among analysts, top-rated analysts believe these five stocks are better buys.