Nothing says comfy and cozy like a deliciously warm bowl of soup. Whether you’re sick and in bed or just trying to embrace the change of seasons, soup can deliver bold flavors and plenty of nutrients to warm you up and nourish your body. And if you’re someone trying to save money on groceries or just don’t have time to make homemade soup, canned options can come in handy.

Unfortunately, some canned soups contain lower quality ingredients than others. For example, to preserve their shelf life, many canned soups contain enough sodium to exceed your recommended daily value in a single serving, while others may be high in saturated fat or contain unwanted preservatives.

Read on for our list of dietitian-recommended canned soups with the lowest-quality ingredients to avoid. And for more helpful grocery shopping tips, be sure to check out 10 Ice Cream Brands With The Lowest Quality Ingredients.

Most canned chowders are flavorful and very creamy, which can be delicious on a cold winter’s day, but many of them are also full of fat and sodium.

“This particular soup isn’t necessarily selling as healthy, but there may be a misconception that because it’s made with chicken, there’s an element of health,” says Trista Best, MPH, RD, LD, dietitian at Balance One Supplements. “Unfortunately, that’s not the case because this soup has 390 calories for the can, along with 14 grams of fat, 1,800 milligrams of sodium, and 12 grams of sugar. In terms of ingredients and nutrients, this Progresso Chicken Corn Chowder is one of the lower quality options on the market.The base of this soup is made with refined carbohydrates, oils and additives for added taste and texture.

Some canned soup options market themselves as being full of meat and vegetables, but Best warns that’s not always the case.

“When it comes to quality, this beef stew is almost beefless. Instead, it’s ground beef flakes. stew and disappointing carrots that are barely there,” says Best.

RELATED: 9 Secrets To Cooking The Best Steak Only Chefs Know

Probably the most popular canned soup, Campbell’s Chicken Noodle Soup is a classic you might want to leave on the shelves.

“This Chicken Noodle Soup is a go-to for most consumers looking for a soothing soup during illness or just to curb a soup craving,” says Best, “but unfortunately the quality of the ingredients and nutrients in this soup make it one to avoid if possible.The high amounts of monosodium glutamate (MSG) wreak havoc on your gut health [when consumed in excess in your diet]according to a study by PLoS One. Whereas I certainly think MSG has a place in the food industry, it’s often overused.”

RELATED: We Tried 10 Chicken Noodle Soups and This Was the Best

Campbell’s also sells soups that are supposed to be aimed at kids, but Best warns that just because they’re marketed for kids doesn’t mean they’re healthy for them.6254a4d1642c605c54bf1cab17d50f1e

“One of the worst foods, in my opinion, are those that are sold under the pretext of being healthy and safe, but in reality are not. Such is the case with Campbell’s Chicken and Stars. This soup is made with refined carbs that can contribute to inflammation and wreak havoc on gut health,” says Best. “Additionally, the sodium in one serving (790 milligrams in just 1/2 cup) is a quarter of the recommended daily value for this nutrient, which is dangerous for everyone, but certainly for the children it is marketed for. “

According Lisa Young, Ph.D., RDNdietitian and author Finally full, finally thin and member of our medical expert advisory board, Campbell’s Homestyle New England Clam Chowder is worth skipping on grocery store shelves. “This soup contains nearly a day’s worth of sodium and is also high in fat,” says Young. In fact, there are 890 milligrams of sodium and 10 grams of fat in just one cup. 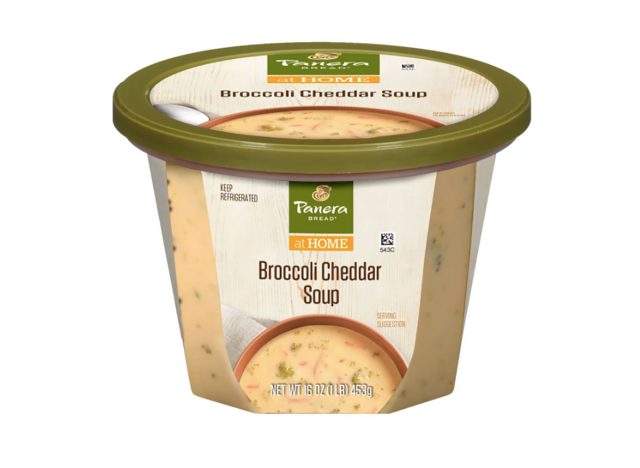 Although technically not canned, this take-out soup option from Panera can now be found at most grocery stores. However, “this soup is high in calories, fat, and saturated fat, so I would skip it,” Young says.

In just one cup, you’ll get 14 grams of fat and 9 grams of saturated fat, along with 990 milligrams of sodium.

You don’t have to completely avoid canned soups, especially because they’re an easy and affordable way to make a quick meal. Just be sure to read the nutrition label before tossing them in your cart.